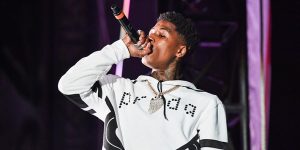 YoungBoy Never Broke Again is currently East Baton Rouge, La. jail after being detained for a potential probation violation after the shooting he was involved in in Miami last weekend. During theshooting, a bystander, Mohamad Jradi, 43, was shot and killed. According to YoungBoy’s lawyer, the rapper wishes the shooters got him instead of Jradi.

YoungBoy’s attorney told the Miami Herald his client was the victim in the shooutout between his crew and another group. “He was the victim of an assassination attempt,” Manasseh said in an interview. Manasseh also says that YoungBoy will try to help the family of the victim out, possibly monetarily. He added, “He told me, ‘I wish they would have gotten me, not him.’” said Youngboy.