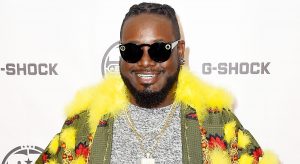 T-Pain has had a bit of a resurgence lately, and he’s taking full advantage of it. He recently confirmed that his new album is complete and ready to drop soon. “Just finished my album #1UP,” he wrote on Twitter “#COMINGSOON”.

1 Up comes on the heels of Pain’s Everything Must Go mixtapes.   Vol. 1  dropped this past August, while  Vol. 2 touched down in October. The tapes were a compilation of unreleased music that the singer wasn’t doing anything with. Artists like Joey Bada$$, Ace Hood, Bow Wow, Joe Budden, MJG and more appeared on the projects.

Check out T-Pain’s tweet confirming  his new album below.

Just finished my album #1UP #COMINGSOON