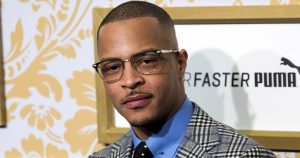 T.I. is keeping up his criminal justice reform efforts by joining a newtask force in Atlanta whose purpose is to come up with a new use for the city’s jail.

The task force will also include city activists, council members and criminal justice reform volunteers, according to WSBTV Atlanta. The group will meet up and brainstorm on alternative ways to use the Atlanta City Detention Center, which is used to house people cited for violating minor traffic laws and city ordinances. Their recommendations will go straight to Mayor Keisha Lance Bottoms for approval or denial.