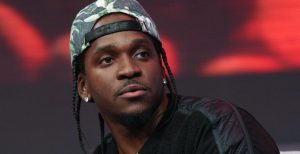 Pusha T’s beef with Drake has been brewing for years, but in the summer of 2018 it all boiled over when Push dissed Drake on his album. On Monday, Pusha addresed the rrap battle again in an article with Variety. He talked about the process of recording his Grammy-nominated Daytona album and standout diss track.

“It was always going to be, always going to happen,” Pusha said about the diss appearing on the LP. “I was always going to get off. ‘Infrared’ had to happen. We were doing the back and forth. He had ‘Two Birds, One Stone.’ This is what rap is. He is… it is a machine in dealing with him. So we deal. But I had to do things at my own time. You can’t just jump out there. We’ve seen how that works when you just treat it like a street battle. It’s really not. You have to play chess.” he said.

“I was in it for the long haul … for hip-hop,” Pusha said. “I thought this was going to be a running thing, back and forth. I was sure he’d have a rebuttal. I did what I wanted to do. I only deal in truth, how I see things. When you’re dealing with words, it’s a way of dealing with truth and how the pubic process that, how they interpret that. And what touches them and what touches the person you’re going against. I actually thought we were going to keep on.”