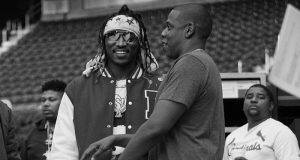 In, Jay-Z seemingly referenced Future on his track “Kill Jay Z”. During the verse, Hov says “I don’t even know what you woulda done In the future, other niggas playin’ football with your son”.  In this line he cleverly references how Future’s son Future is often seen playing football with his NFL superstar-step-dad, Russell Wilson, who his married to his ex Ciara. Future briefly touched on the matter during a recent interview. He revealed a conversation that he and Jay had about the line.