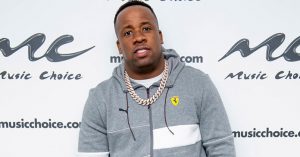 On Saturday night (June 8), Yo Gotti was performing at The Block Party Festival in San Antonio, Texas. While he was perfoming his single “Law,” one overzelous fan got too excited and hopped onstage to bounce around next to Gotti. One of Gotti’s security guards expiditiously made his way to the man and tackled him out of the picture. Yo Gotti continued rapping while everything went down. According to TMZ, after getting tackled, the man was detained by the police.