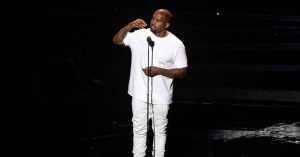 Kanye West admittedly loves to watch cartoons, and one of his favorite animated series is the Adult Swim’s, Rick and Morty.

The show’s creators, Justin Roiland and Dan Harmon, learned this fact and offered him to star in his own episode. Roiland said that Yeezy is “always welcome” and offered an “open invitation” to make a cameo voiceover on the show. Then Harmon took it up a notch and told The Blast that Kanye can have his own episode. “I’m giving him an episode, I’m making it official. We have 70, he can have one. Kanye, you can have an episode.”