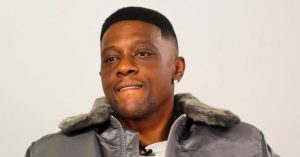 Rapper Boosie BadAzz was arrested yesterday on felony drug and firearm charges after a traffic stop in Newman, Ga., according to The Newman Times-Herald.

Boosi was intially pulled over by police after allegedly swerving his Dodge Charger in and out of traffic. Police Sgt. Jeff Bugg stopped Hatch, along with former NFL player Antonio Allen, who was also in the car.

The officer claims to have smelled marijuana from the vehicle, prompting the search. He allegedly found 11 grams of suspected marijuana and a loaded 9mm handgun, as well as a bag containing a “large sum of cash” and a vape pen with what is believed to have THC oil in it.