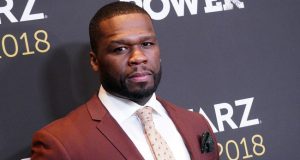 50 Cent who once had a good repore with 6ix9ine, publicly spoke out about what is currently going on with the young rapper. 6ix9ine has accepted a plea deal in a federal racketeering case, and allegedly identified his fellow Nine Trey Gangsta Blood members as assailants in multiple serious crimes.

While on DJ Drama’s Shade 45 radio show, 50 spoke on the RICO case.

“[RICO] laws were designed for you not to escape them. When I saw what I saw in the paper, I feel like he’s gonna tell on everything,” 50 predicted. “That was the part that wasn’t even in the indictment—the stuff that they’re saying that he’s talking about are not in the indictment so he’s offering that along with everything else. And then they added those new people to the indictment. I think [after he comes home from jail] that he can make music and people can hear it, but the original core and base that he tapped into won’t rock.”

50 believes RICO charges are far worse than any other kind of charge.

Check out 50 Cent’s interview with DJ Drama below.