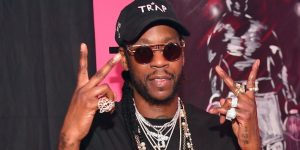 2 Chainz has officially released his new album Rap Or Go To The League, with NBA great LeBron James serving as the project’s A&R.

The album includes guest collaborations  from some of hip-hop’s elite. Kendrick Lamar, Chance The Rapper, Travis Scott, Lil Wayne and E-40 and more contribute to the project.

Check Rap Or Go To The League below.